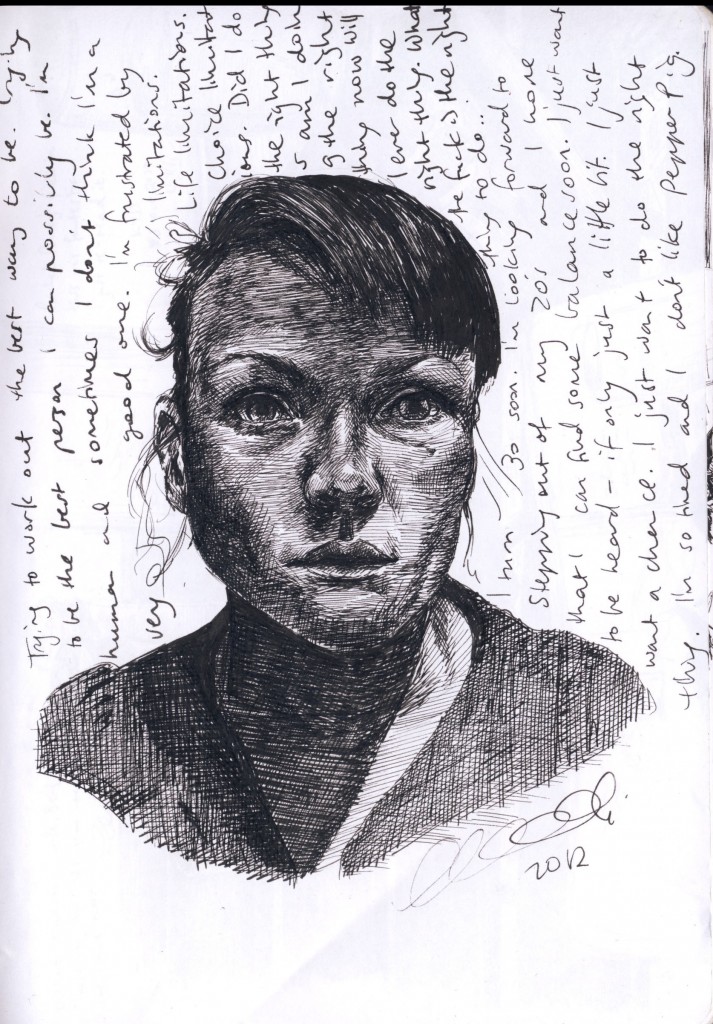 Around this time five years ago, I was living in Germany and I was at crisis point. I had one doctor who would listen to me and he made me promise that if and when I got to a point that I would harm myself – go to him. And I did.
He was a lovely man, he’d visited Australia many years before and brought back a whole lot of small jars of vegemite. Not because he liked it, mind you, but because he found it endearing; you Australians are the only people who eat this he would say. He gave me the last small jar that he had.

On this day that I went to him I can’t remember what I said, I can’t remember how I got myself there but I did and he made a few phone calls, told me in his calm and reassuring voice that I was not ok and it was time to do something about that. He wrote a letter, tucked it into an envelope and gave me the directions to the hospital. ( Just down the street, make a small left and walk along the canal a little bit. )

They took me in right away. I had a long conversation with a firm but kind woman. She made sure that I knew they were here to help, but she needed me to promise that if I was going to harm/ kill myself that I tell someone first – there are other sick people in here too. Which has always stuck with me – our actions affect others. And really at the end of the day – the support can be accessed but you have to do the work. You have to.

Anyway, I won’t go into specifics – it was a long time ago now and the details have faded. Things that were important are no longer, things that stung then do not now. There are things I never have to talk about again – I feel so damn lucky for that. It’s been a long, long road and I did pick up, fall down, pick up again and fall back down, again. Meanwhile life happened through all of this.

I drew and I wrote through it all. Frantically. Not all of it was very good, I even had a blog which was very public. This was my first, huge dive into social media and writing and though there were things that I did then that I wouldn’t do now – I do not regret it.
I didn’t keep the words. There were tens of thousands of them, but I didn’t want to keep them. I have some of the drawings and they are gut wrenching enough.

I felt like back then that that point in my life – the intersection of motherhood, a deeply traumatic birth and complications after that, a personality disorder and ( mild, can it be mild? ) alcoholism split me wide open. I was so damn raw and I think far out, brussel sprout I must have been ( no, I know I was ) so fucking difficult to deal with. I was so damn selfish, just trying to survive. Everything was at crisis point, all the time. I couldn’t even handle when baby got sick and cried in the night. That’s when you know it ain’t right – when you can’t even do the normal stuff of life.

My mental health has been something people have been throwing in my face and using against me for years, and the more I read about other people’s experiences with their own mental health, I know this to be common. Whatever the reason for that to be is other people’s business, but I think it is deeply reflective on them. If someone has depression, doesn’t mean they have delusions. If someone has delusions, doesn’t mean they make stuff up to get attention. When someone is mentally unwell, it doesn’t make them a bad person. These things do not need to be said but then again, they do.

Motherhood is an experience I will probably be unpacking for the rest of my life. I think that is mostly due to the barriers that are pre exisiting to my stepping into it and reinforced by people and media every day. I don’t think we are ready to deal with the truth of it because we can’t even say vagina – we can’t even talk about women’s experience of the world. There are so many things about it that make me feel isolated, I still can’t articulate it all, and I’m not sure that I want to. I see birth culture and I don’t even know where to start – I just shut down and shut it off – just fuck off.

I will never do it again, this is a deep truth I know of myself. I know many people have judged and worried over what this says about how I feel about my child. None of this has got anything to do with the child, or rather my feelings towards said child. The motherhood experince is just that, an experience. It is to do with what has come before and what is going on in the world now. The children are there, but this is not due to them.
I’m not going to add a disclaimer about my love either because that would only be there to make others feel better about this and quite honestly – only said child needs to know that.

Time to go and draw now. 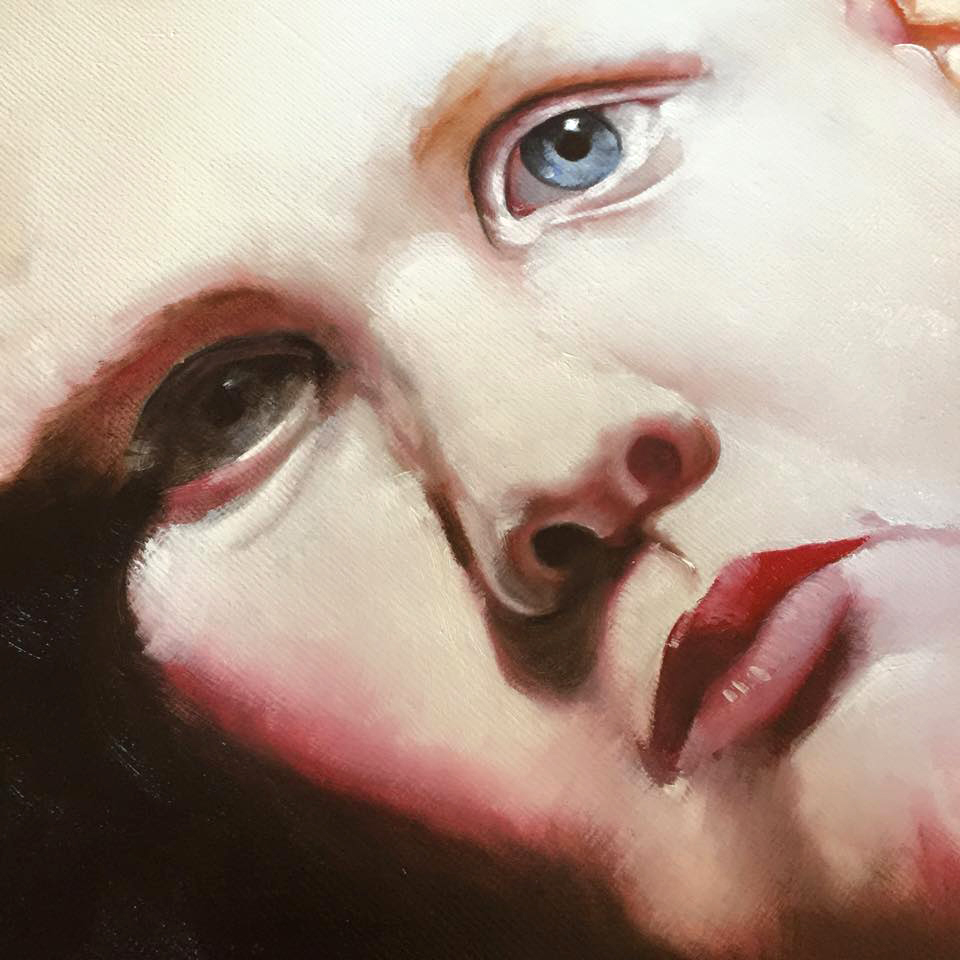 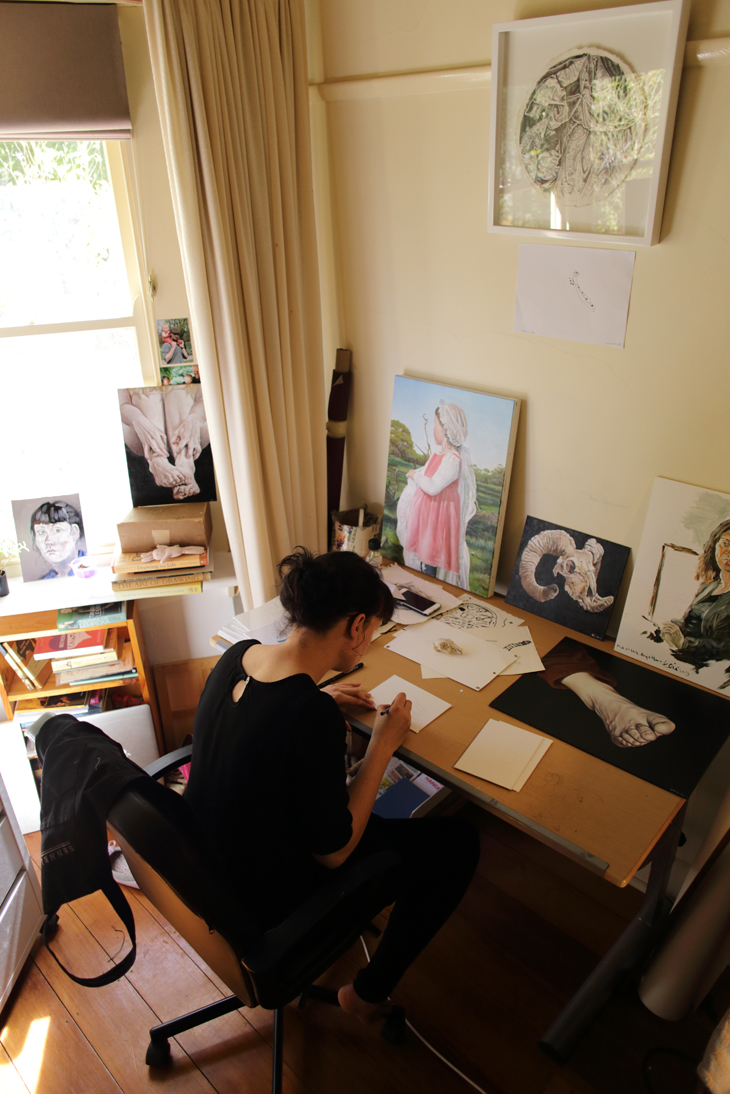 It’s the first day of school holidays and I was really excited about it because it means lazy mornings and pj days and spending time with kid in the studio. It means maybe we will go to a reserve and swoon over animals, it means special treats and probably some time out.

Today we went for a long walk and borrowed books and made an easter egg decoration for daddy. She shared toys with another kid and then we came home for sandwiches and painting. 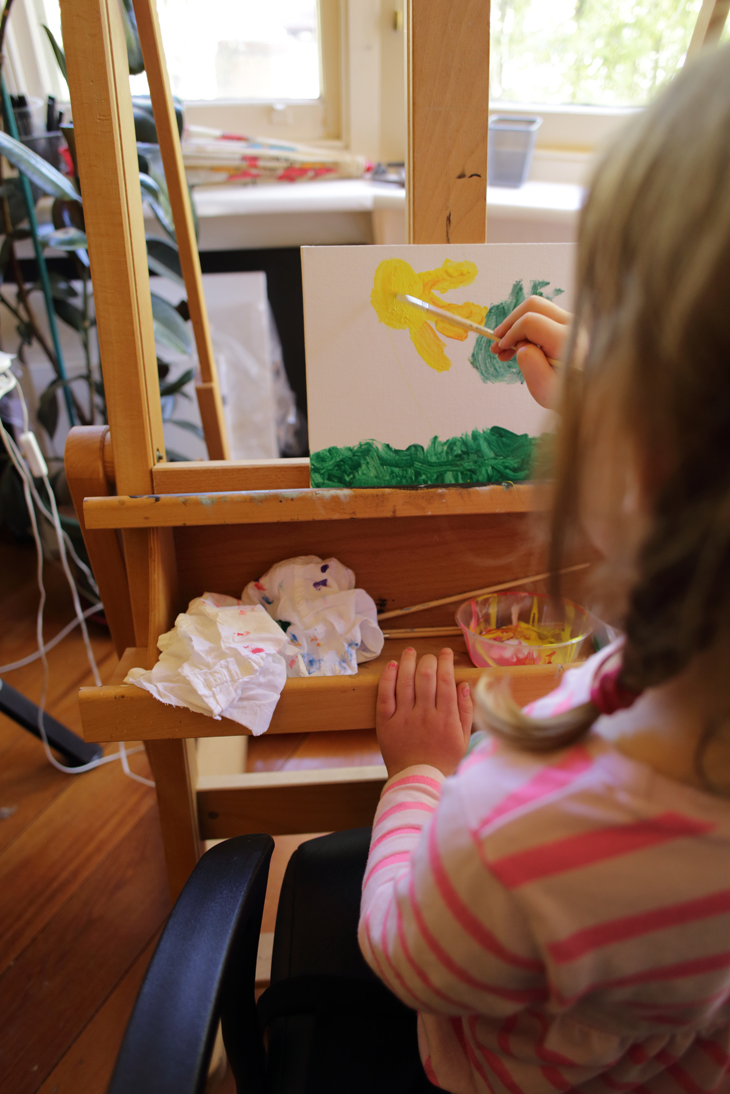 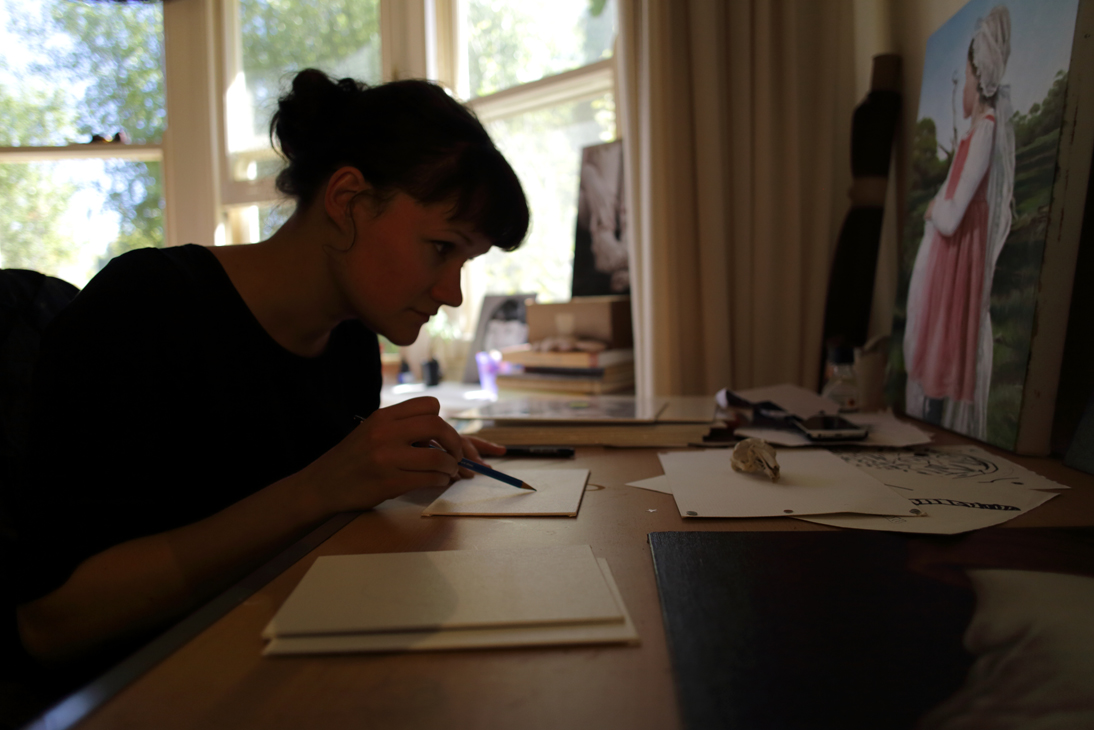 And then I sat at my desk and did a little painting of a skull, and my pelvic floor exercises – because I am a multi-tasking genius. 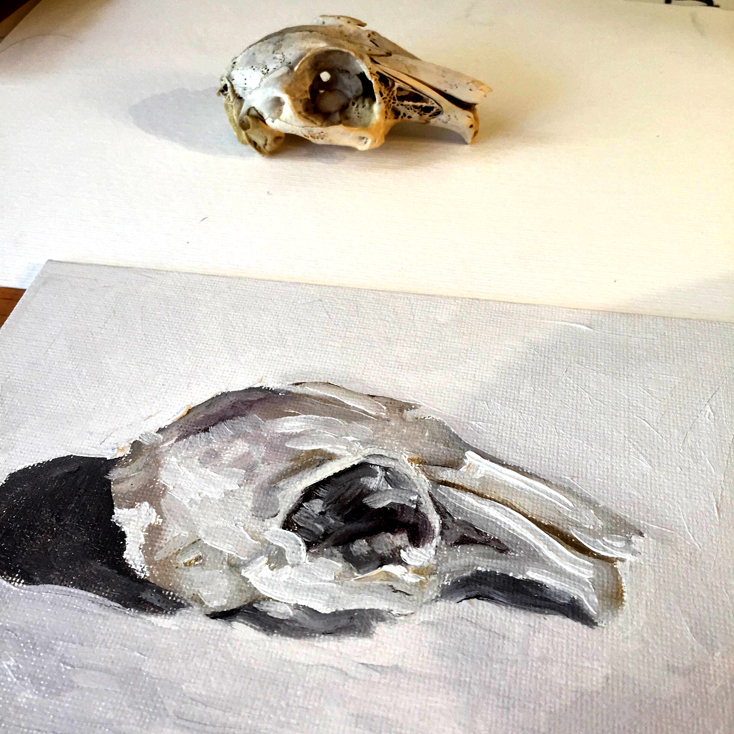 Then I made dinner and spilt bread crumbs all over myself and into my slippers. I heard the post person go past and he had squeaky wheels.. He totally needs to oil those wheels.

I also found this, this is a detail, a portrait of the most glorious Angie Hart. I am going to finish it because I think it is so beautiful. 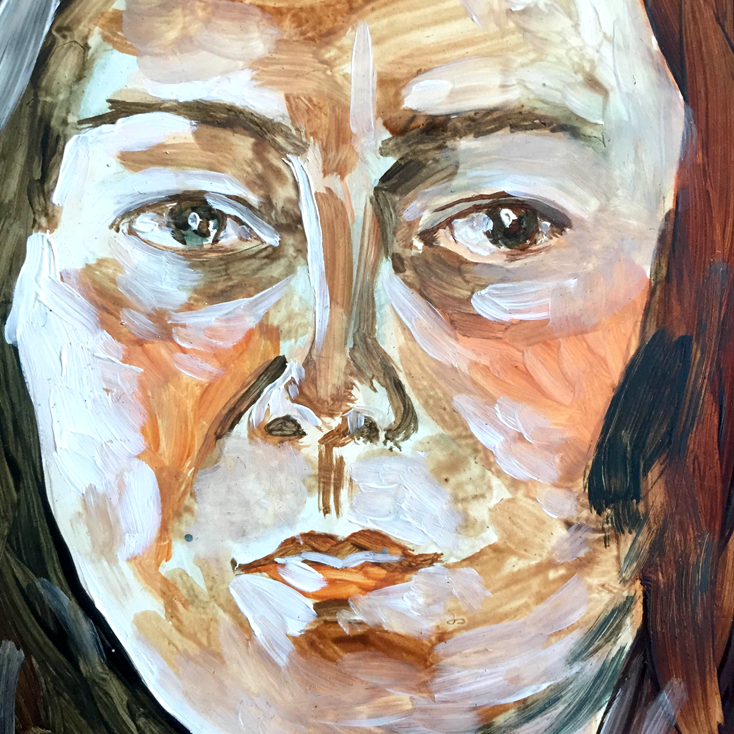 I also have the pieces for another large drawing to begin soon, painting is just a lovely holiday right now.

Photos of us by Gene!
XX 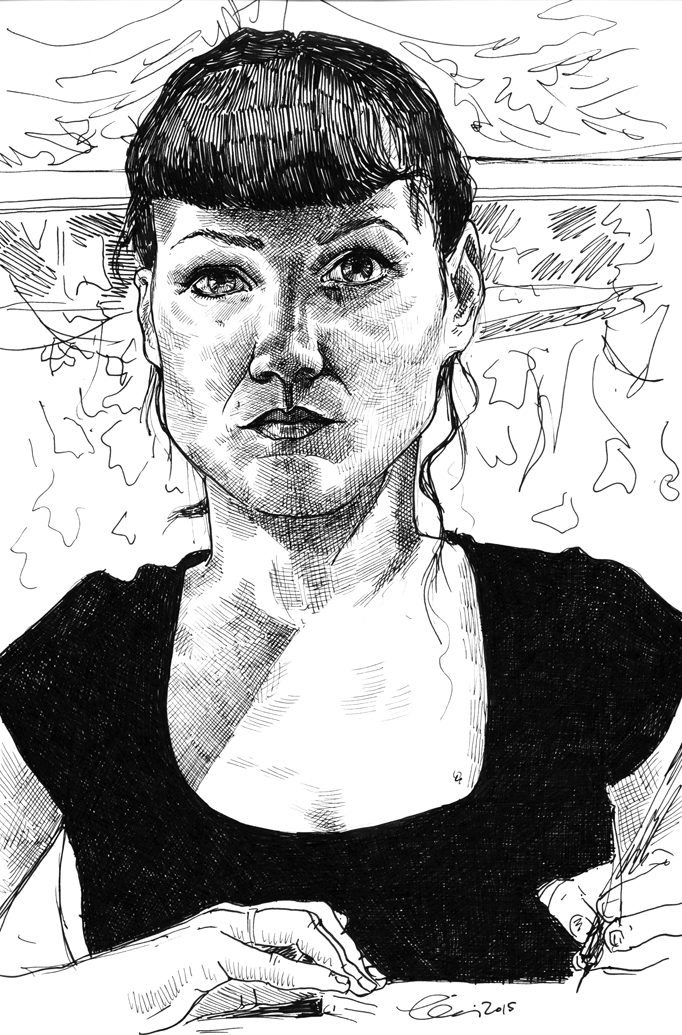 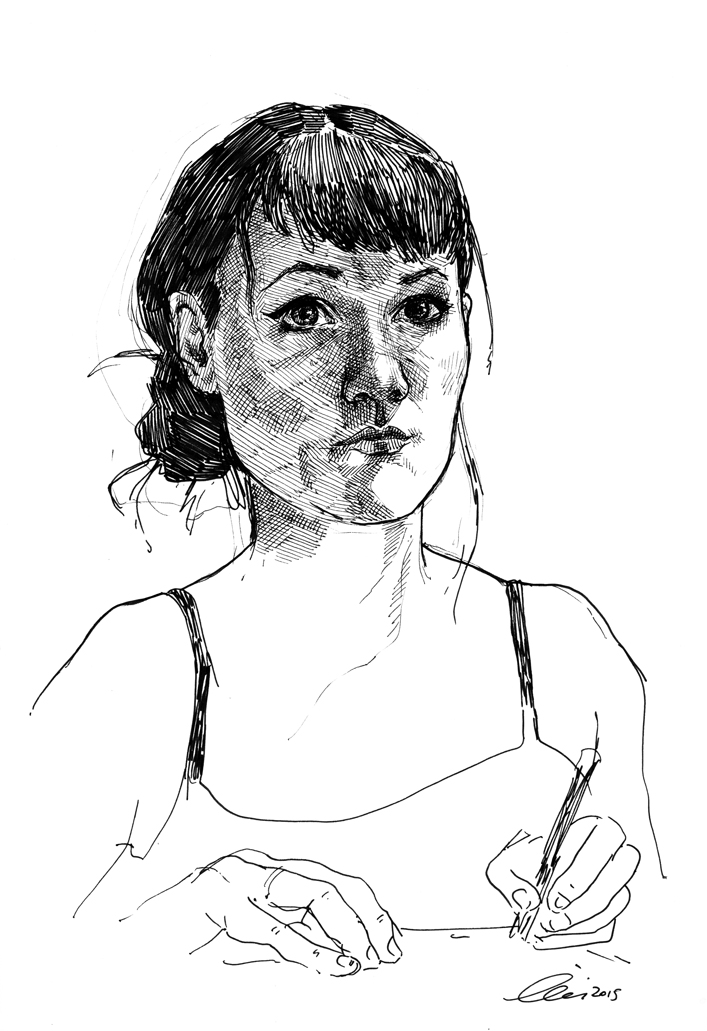