Home is so lovely, being away for three weeks I forgot how beautiful ( parts ) of our house are. It is still very much a work in progress and it’s pretty special.

I unpacked the very next day after arriving back to Australia. Very keen to unwind, get the washing done, settle back in. It’s just over a week now and I am still waking up at 4am but no matter. I think it is harder to adjust when home because now it’s quite dark and the adventure is over. It’s school drop off, pick up, grocery shopping and vacumming. It’s avoiding my studio and worrying about the too many houseplants I have to keep alive.

The last month has been a transformative. I’m dropping a few habits and some decisions have been made for me so I’ve just got to go with it. But doesn’t travel do that for you? Give you a bit of perspevtive and a shove into another direction. I planned a lot of this trip which I’ve never done before and boy I got a lot of things wrong but I learned a lot.

We were in Edinburgh for less than 24hours, which was my first mistake. Edinburgh is an amazing city, and being the end of spring it was very green and exciting to be there. We were originally meant to stay a couple of nights however I had wanted us to go to Fair Isle, but accommodation was only available for two days after we landed. I switched up our plans to stay in Edinburgh and Inverness one night each and then head out to the Isle. I knew it was a lot but Fair Isle is remote and you’ve just got to go with it. I’d wanted to stay at the Bird Observatory as my reasons for visiting was to see the wild life. Sadly earlier this year it burnt to the ground. I am truly sorry for them and I hope they are able to rebuild. I re routed our adventure to visit Orkney Island, which was a little easier to get too and had more options of places to stay. I can’t even begin to describe our time there, Gene had found an Inn and it was a unique experience in the best kind of way. One that I am grateful to have had. I don’t think our stay on Orkney would have been quite as special had of we not stayed there. I will post some drawings about this place in future. 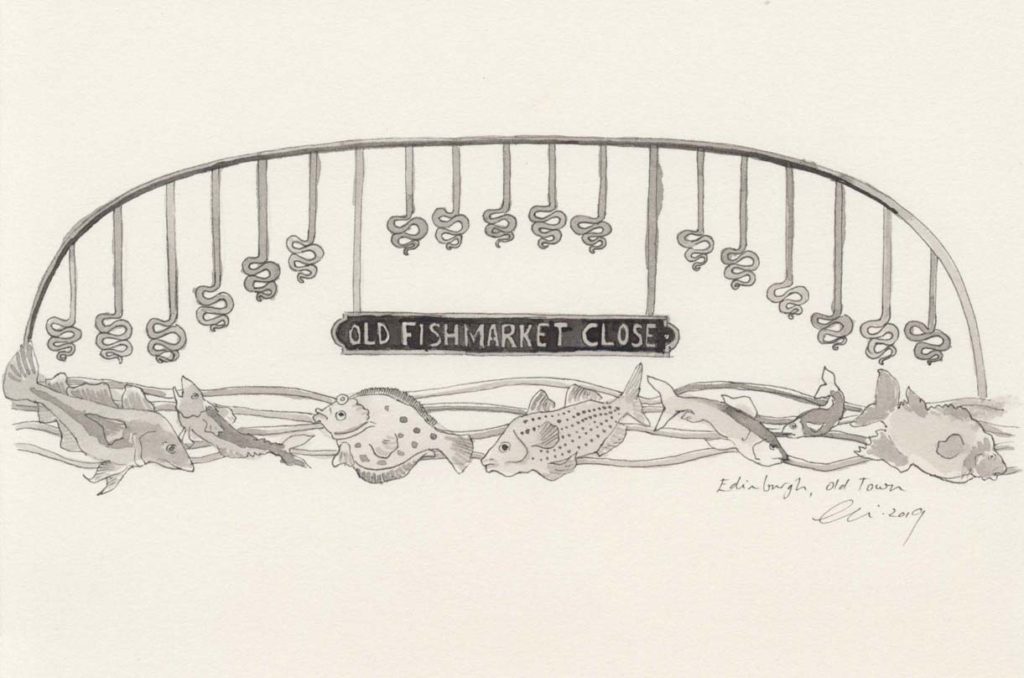 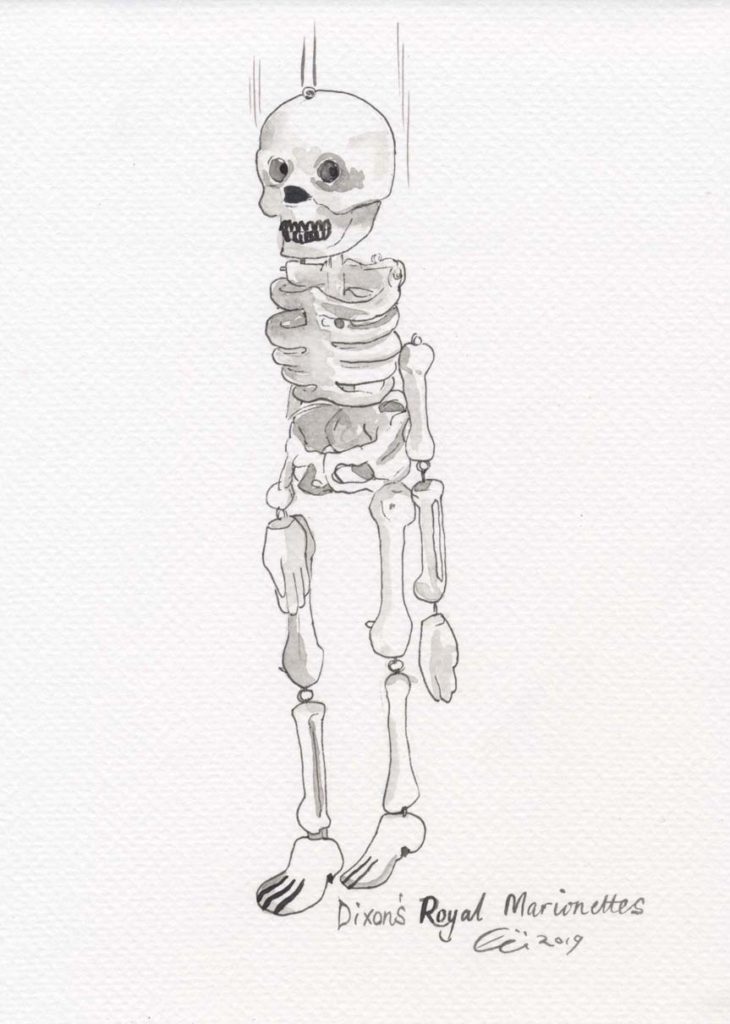 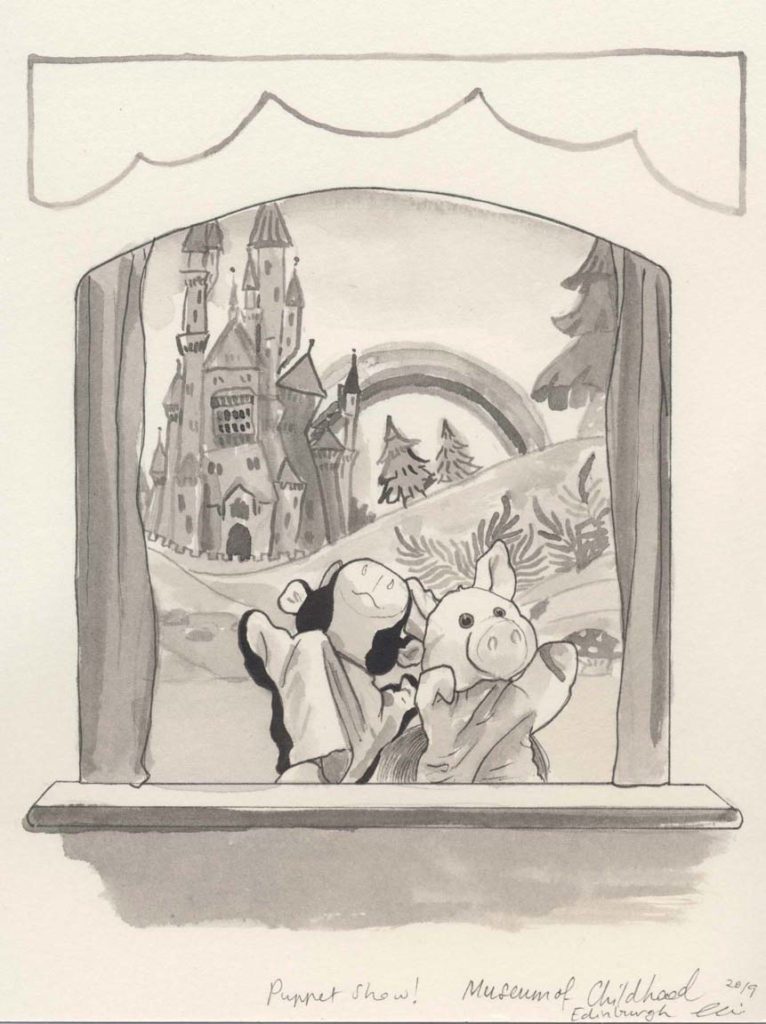 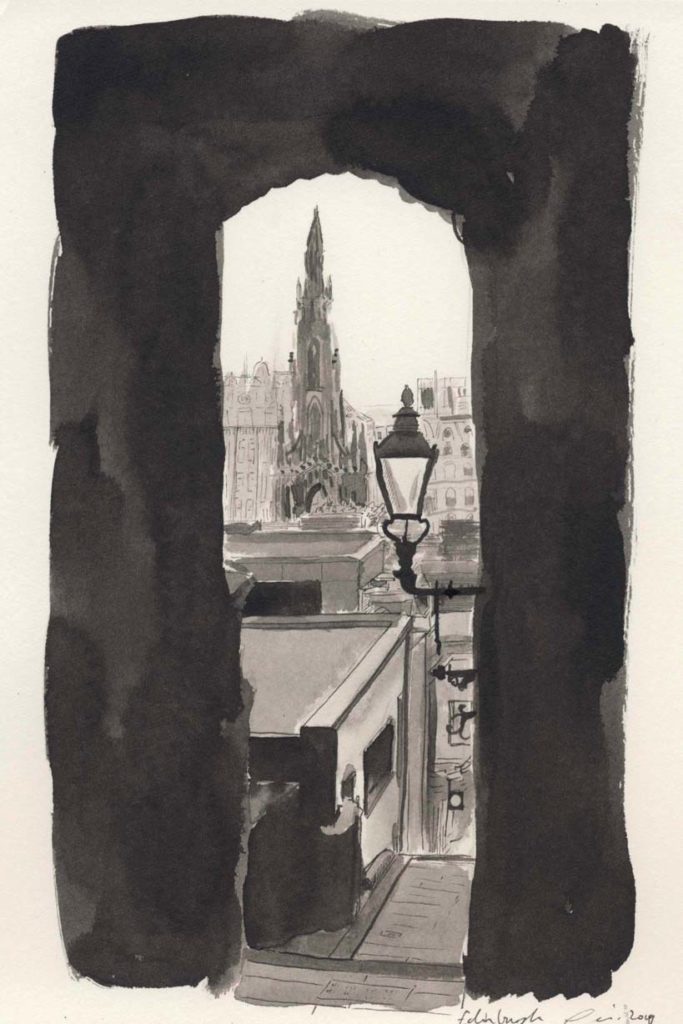 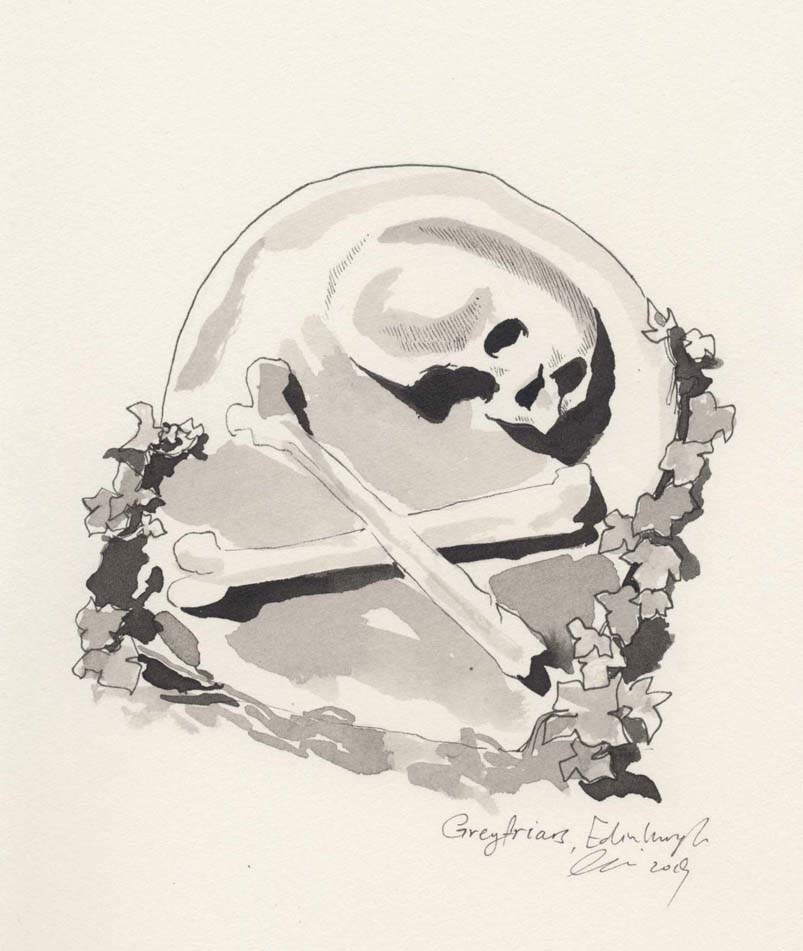 Before we departed Edinburgh we visited an art store because that is important and behind it was the Greyfriars kirkyard. It was very pretty, filled with community herb gardens, birds, squirrels and full of dark history. 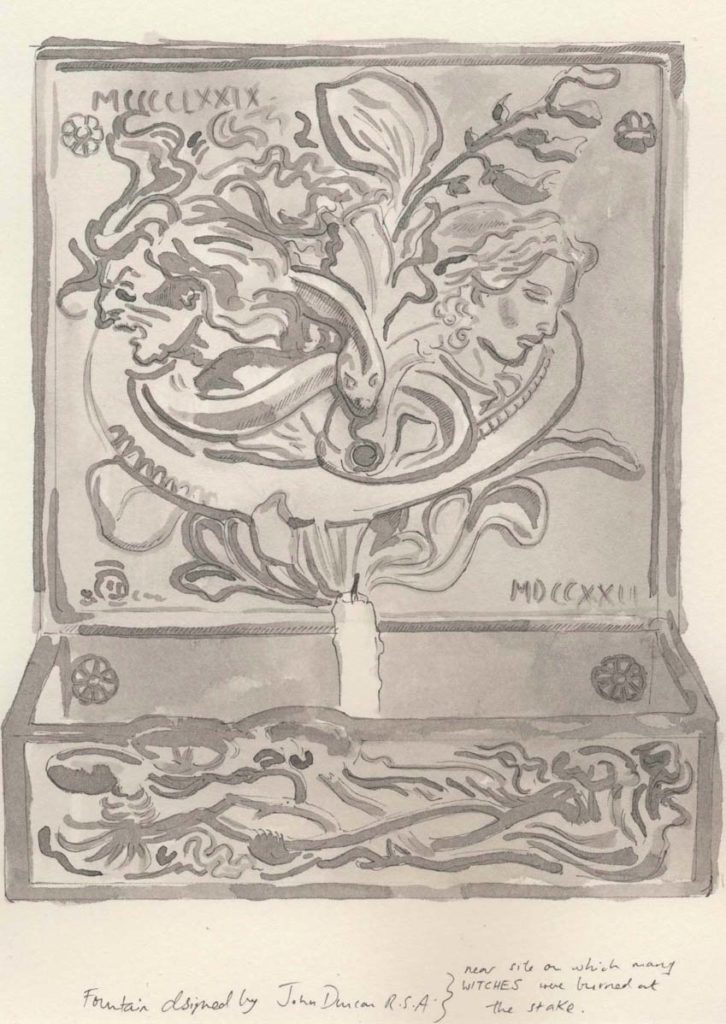 Then things were a little less fun because there was miscommunication. We got lost so I won’t write about that day though we did end up having a comfortable sleep and that is important.

Orkney! I have so much more to say about this place but as I said above, I’ll write about that later as I have more little drawings to add. I will say though that I got to see some puffins! It was at the end of our second day, and I admit that I had been dragging the family about, combing the seacliffs looking, looking, looking. Bloody bugs in our faces, hot sun on the backs of our necks and wind that could steal your breath right out of your mouth. I was really enjoying the different kinds of seabirds and coming to accept hey, we weren’t going to see the puffins when, like a gift, a little pair landed on a rocky ridge right beneath me. First thing I thought was that they were so much smaller than I had expected, I couldn’t believe they were real. Then, as in most of my dreams, I reached for my camera and couldn’t get a good shot, but no matter. I whispered for my daughter to come quietly and oh the joy of pointing them out to her. Not long before this sighting I had been talking with her about patience; ” bird / animal/ nature watching requires a lot of patience and respect“. We then got Gene to come and see and I managed to take some OK photos. A razorbill also decided to join them, which is another magnificent sea bird.

What a goddamn gift. 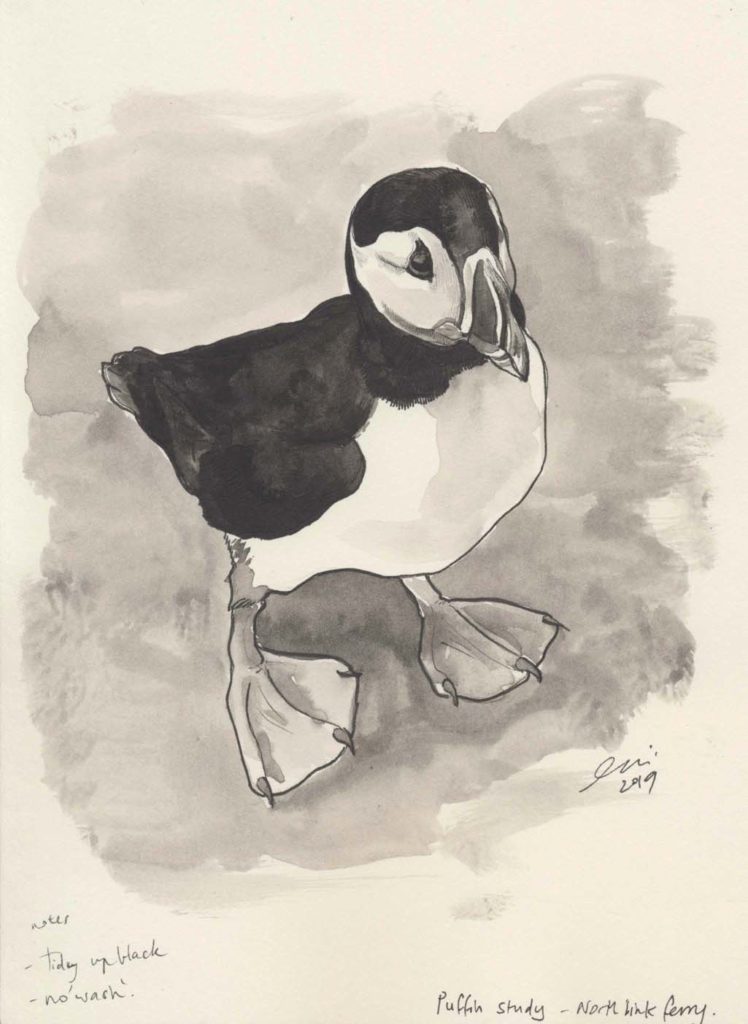 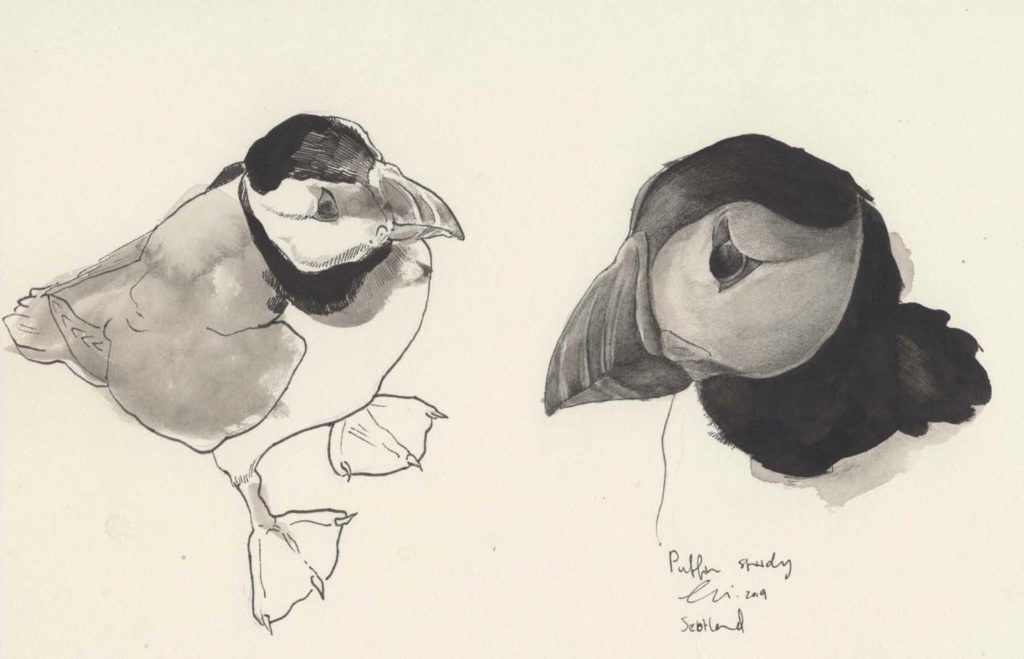 Next stop was Ullapool, we were so tired and very lucky to be staying with a lovely little family so Kidlet got to spend most of the day playing in the trees with another little girl. There was a very special tree I have done a few sketches on, again, that’s another post for the future.

Ullapool is a beautiful town; red squirrels, purple flowers and bumble bees, beautiful loch views and the seafood shack. Again I wish we had stayed a couple of more nights! 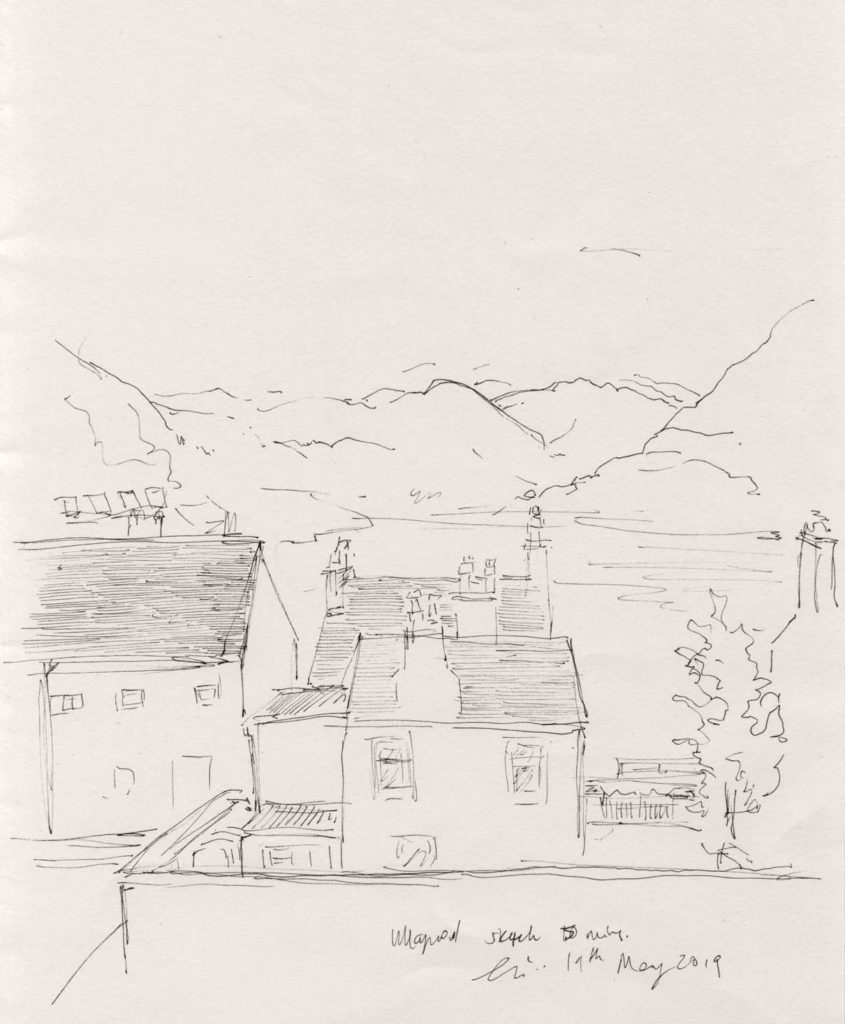 We moved onto the Isle of Skye. Which was a place we were told to go but definitely didn’t expect it to be as beautiful as it is. How can you when you’ve not seen it before. 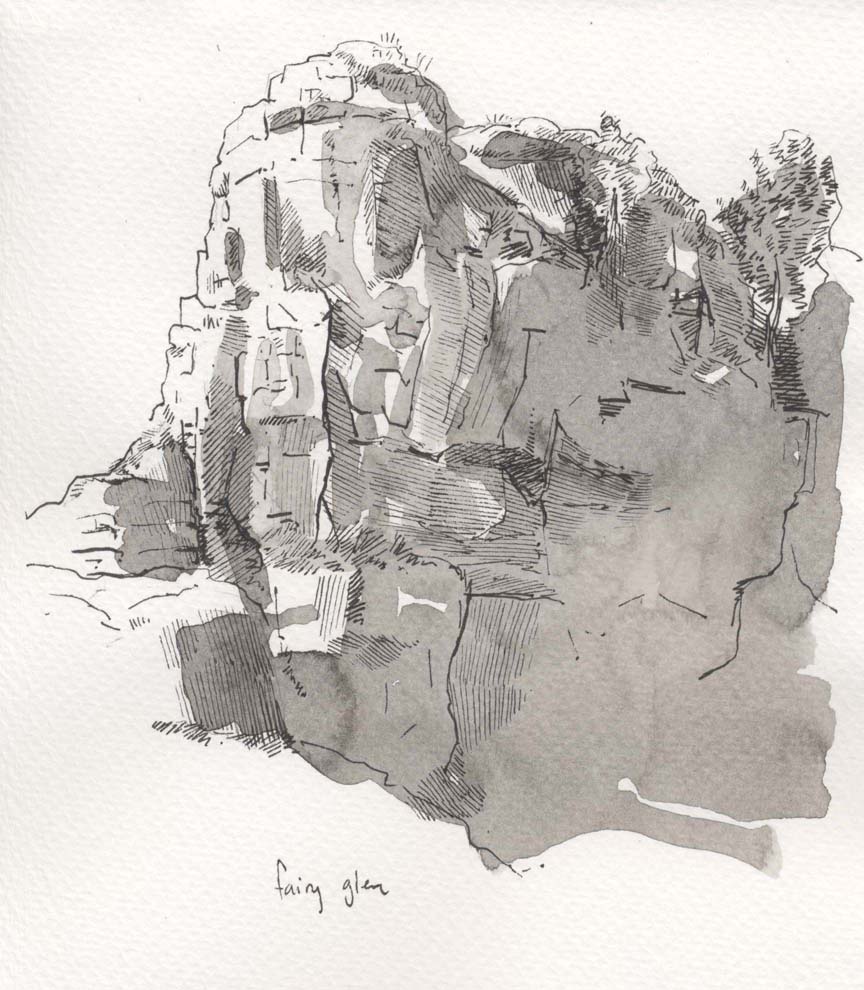 I drew this there. I didn’t walk up to this area. I should mention that I was still really sick with whatever this nasty virus is. I thought that that would be the death of me but then we did an accidental hike afterwards and that well and truly took the life out of me. We walked ( most of ) the Quiraing. Oh my goodness, words will fail me so I’ll post drawings.. again, another post. 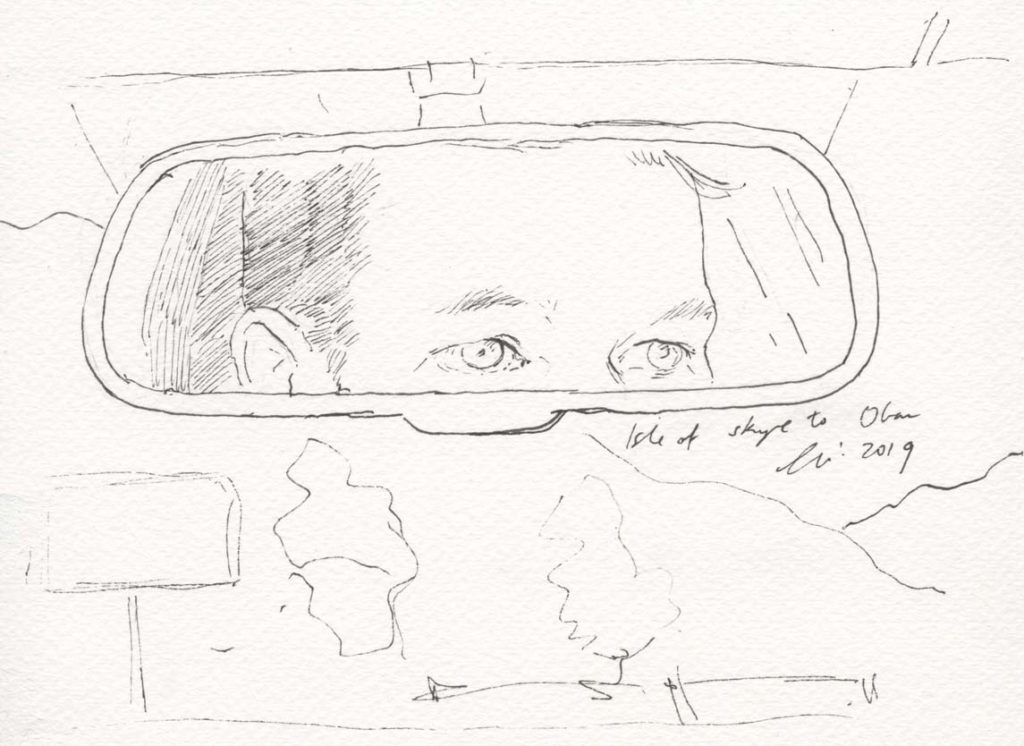 I sketched this in the car from isle of Skye to Oban. 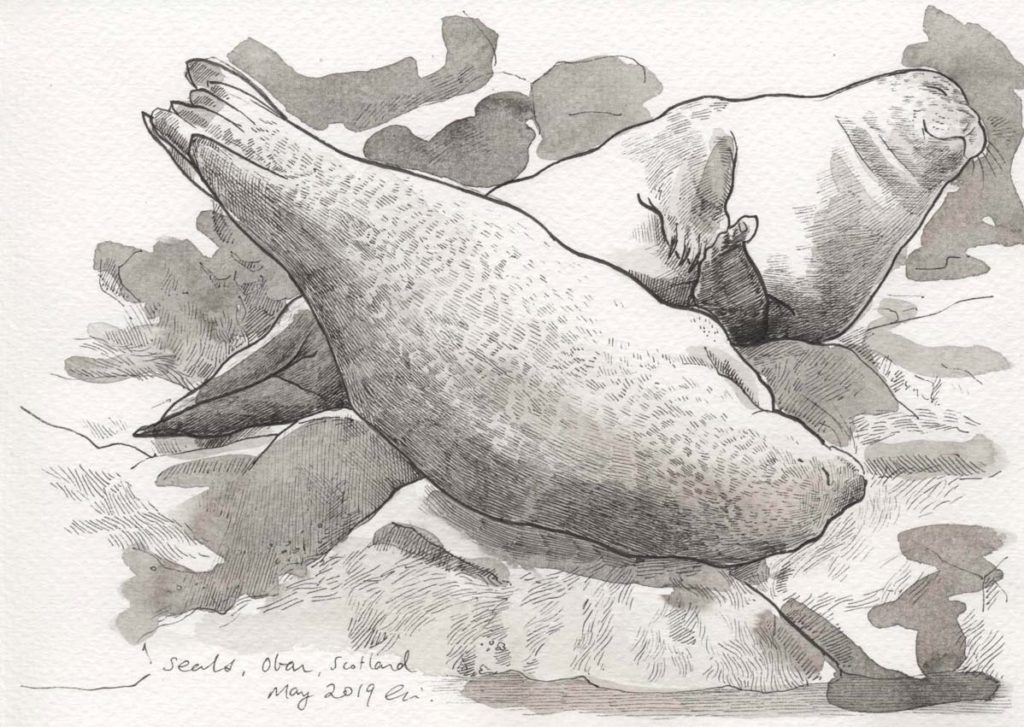 Last stop in Scotland was Oban. Such a great town, we had a good time looking around and went on a little boat trip and saw some seals. On Isle of Skye I had wanted to do a wildlife boat tour but as I read about them it talked about how they fed the wildlife. I’m unsure if that that is ok? So because I wasn’t sure I decided not to do it. This little trip we just observed the playful and very pregnant seals. That is more than enough.

Anyway, there’s more to come as we stopped in England for a couple of days and Wales for the best part of a week. Also there were more drawings but I didn’t include them as there’s just so many. I’ll break them up into different posts when I can as I very much want and need to Get Back To Work.

Speak soon and thanks for reading